On 22 June 2022, the Geneva Interfaith Forum on Climate Change, Environment and Human Rights (GIF) organised, with the support of the Geneva Climate Change Consultation Group (GeCCco), a side event at the Ecumenical Centre in Geneva, Switzerland, during the 50th session of the Human Rights Council (HRC).  The event  discussed the challenges faced by people who are displaced due to climate change or climate action, and the urgency for greater and more comprehensive protection measures.

His Excellency, Mr. Md. Mustafizur Rahman (Permanent Representative of Bangladesh to the UN in Geneva) referred to the Internal Displacement Center (IDMC) report in 2020 which revealed that 98% of displacement occurs from climate-related incidents, and that by 2050, climate-related incidents of displacement will have affected 143 million people. Mr. Rahman requested the HRC to strengthen its mechanisms addressing climate change and human rights and hoped that developed countries would provide resources for displaced individuals.

One of the participants asked: “Shouldn’t we have the right to remain in our ancestral homes?” According to the panel, climate-change induced displacement results in a loss of everything one holds dear: home, livelihood, property, safety and, above all, dignity. Droughts and floods force many to walk for days in search of a safe haven, but sadly some of the displaced will not survive the perilous journey. Those who are able to reach urban centres are met with exorbitantly high food prices and hastily prepared makeshift shelters that are ill-equipped. The lack of water results in a host of potentially life-threatening ailments such as dehydration and diarrhoea. The persons forcibly displaced by climate change who are in an already vulnerable situation also face discrimination, but this is compounded for women or children, as they are the hardest hit by human trafficking, prostitution, begging and other forms of exploitation. Even from the onset, flooding disproportionately affects women and girls in regions where climbing trees or swimming are considered taboo, leading to their untimely and unnecessary demise, reported Ms. Osmawani Osman, (Islamic Relief Worldwide).

Other members of the panel concurred that it was vital for States and the international community to plan ahead of major disasters and not act on the spur of the moment. They called for more to be done to raise awareness, address the root causes of climate change, allocate sufficient resources and technology, and ensure human rights protection for the affected people. “Under no circumstances could a State or organisation dislodge entire communities in order to plant trees ‘for the environment’”, opined Dr Ian Fry (UN Special Rapporteur on the promotion and protection of human rights in the context of climate change).

Dr Abeya Wakwoya (Ethiopian Evangelical Church Mekane Yesus), observed that where possible, mitigation efforts could help avoiding forced displacement at the outset, especially efforts towards the youth can be key, by advising them that the money meted out to a smuggler might be better spent on a business venture locally.

Ms. Osman offered that one of the ways to uphold the dignity of the displaced people is through the method of cash transfers, enabling individuals to freely spend at the market while contributing to the local economy.

Both Dr Fry and Mr Christian Wolff (ACT Alliance) advocated for greater attention to the subject and for the necessary changes in international and national legislation that would acknowledge and reflect climate-induced migration and increase legal pathways so that those forced to move because of climate change could settle in a receiving State.

The event was attended by around 100 people via both in person and virtual participation. 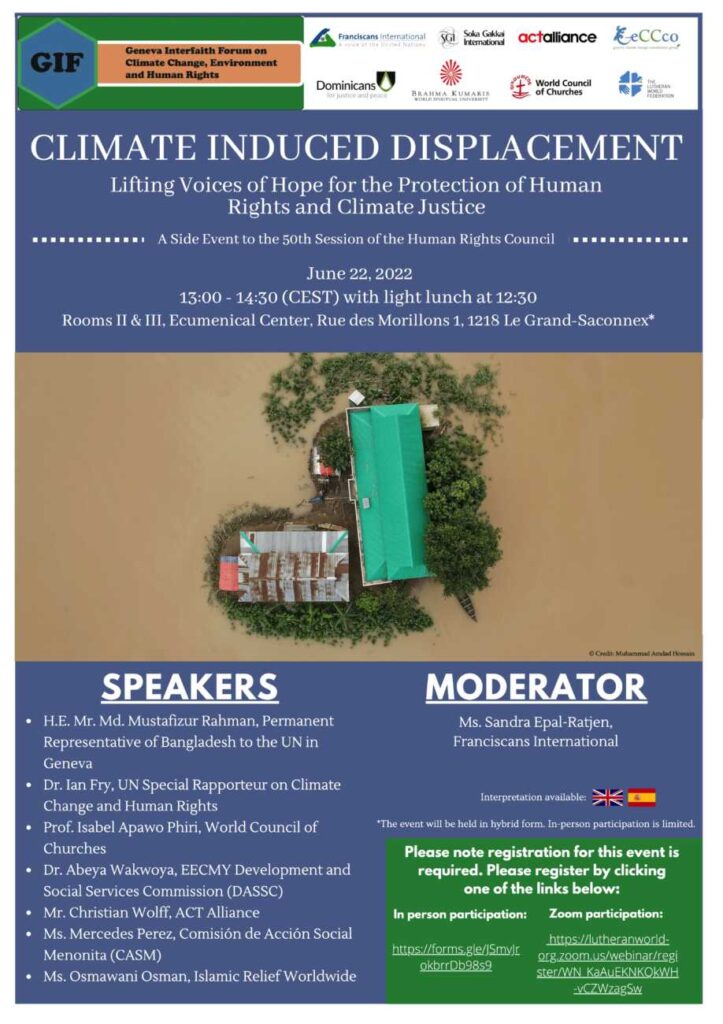